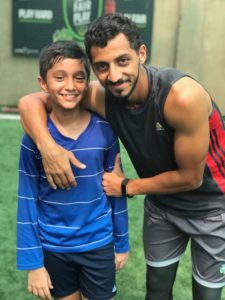 Never give up! Failure and rejection are only the first step to succeeding
– Jim Valvano

The Kleinetics mission is not just to impart fitness to children but also character development through disciplined training that strengthens the will to rise after every fall. In this post, we’d like to show this by way of example of our senior coach who is also a mentor to the kids. His superlative achievement, this year, has made us very proud.

End September, Kleinetics Coach Nitesh Aswani, an I-league football player, received a call from Pune City FC. He wasn’t selected for the team yet, but was given the opportunity to practice with the team and if found good enough, could earn the team jersey. Charged at the prospect of almost fulfilling his dream, Nitesh landed in Pune. But all his dreams came crashing down when he learnt that only confirmed team members were allowed entry into the locker room. For the others, there was neither luxury hotel nor water on the field.

Despite his crushed spirit, Nitesh trained diligently every single day. He pushed himself so hard that there came a point when he was tired and wanted to stop. He would then close his eyes and see that list in the locker room without his name on it. That would immediately get him going again. For the player in remarkable form who was used to attention and recognition, it was the most humiliating week in his entire sporting career. Every day, after practice, he would go back into his dingy room and cry, but act happy whenever his parents called. He never revealed the truth to his parents. The easiest thing for him would have been to quit and return home. But he wasn’t ready to give up so easily. A week passed with no turn of fate. Nitesh was scheduled to leave for Chennai for other I-league matches. He decided it was time to speak to the coach and clarify his status.

A huge surprise awaited him inside the dressing room! On the notice board was the list of all the selected players and his name was on it! Nitesh was ecstatic! His determination had paid off. Later, he found out that all this was part of a deliberate plan to separate the quitters from the winners!

Even when he coaches children at Kleinetics, Nitesh inspires them to focus on the training and stick to a routine. While children form habits easily, they hate monotony. Unlike adults, if children were to do the same drills repeatedly, they would be easily bored.

Nitesh, through the Kleinetics program, always ensures that energy is high in class. Following the Kleinetics methodologies, he knows how to mix up the routine to keep the kids engaged and interested. His classes are the most popular because he maintains a fine balance. While fitness was the primary aim, the Kleinetics coach also ensures that children enjoyed the process.

Although it is no easy task to discipline children, Nitesh demands and maintains discipline and punctuality. Any child that arrives even a minute late for training has to run one extra lap of the ground. Two minutes, two laps and so on…. Children who arrived early are given a special incentive – they are made captains of the teams during game time. Nitesh’s Kleinetics class is a “model” class for all the coaches too. New recruits watch and learn his technique – both at football and Fitness coaching.

But the test of a Kleinetics coach is in the success of his students. Angad Kanwar, one of Nitesh’s favorite students remembers him fondly. Like Nitesh, Angad too is passionate about football and his dream was to play for his school. The first time he tried, Angad wasn’t selected. Although he was disappointed, Nitesh encouraged him to diligently train. Under his guidance, Angad’s speed steadily increased. His touch with the ball improved. After a year’s rigorous training, Angad was finally selected in the school team. Although Angad’s favorite footballer is Cristiano Ronaldo, he is so fascinated with his coach that he thinks Nitesh’s game is even better than Ronaldo!

Be a Hero in a child’s life.